A SYMBOL OF FREEDOM: THE HISTORY AND MEANING OF THE “DON’T TREAD ON ME” FLAG

The "Don't tread on me" flag is a symbol of freedom that originated in the United States during the American Revolution. The rattlesnake on the flag is a representation of America and its defiance against tyranny. This flag has been used by many different groups throughout history, each with its own interpretation of its meaning. Today, the "Don't tread on me" flag is often used by conservatives and libertarians as a symbol of liberty and freedom. 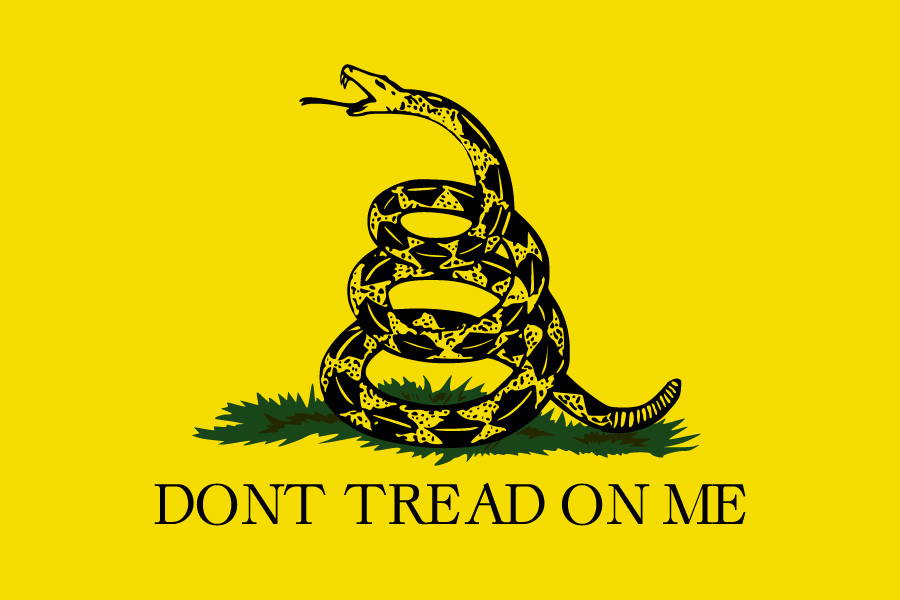 The Don't Tread On Me Flag - Sometimes, you need to take a stand for what's right even if it means facing off against an enemy. The Gadsden flag is no different and was used by many groups throughout its 200+ year lifetime as such; but where did this famous saying come from? We'll explore that here along with why the designer chose rattlesnakes in particular who represent early United States pride!

“Don’t tread on me” meaning

The phrase "Don't tread on me" is a warning to those who would attempt to oppress or control others. It is a declaration of independence and self-reliance that first originated on the Gadsden Flag, depicting a coiled Rattlesnake getting ready to attack. The cry for independence became popular in America's revolutionary war when fighting against British Rule; it resurfaced again later after more than two centuries had passed by - this time with different meanings but still retaining its original intention: standing up against authoritative powers without fear while carrying yourself proudly as an individual free citizenry committed towards personal responsibility & self-reliance rather than blaming others who deserve blame.

“Don’t tread on me” flag meaning

The Gadsden flag is a symbol of liberty, freedom, and justice. The original design featured only a plain yellow field with a coiled timber rattlesnake facing left while “don't tread on me” was written in black letters below it, but the modern incarnation includes the apostrophe which was never there originally.

Timber rattlesnakes are highly venomous snakes found throughout North America. They're one of the first recurring American animal symbols and have been well-known for their fierce nature since colonial days when they caused much fear among British subjects who settled there in 13 original colonies (plus DC). The words “Don’t Tread On Me" became an oft-used motto warning those loyal to King George.

The Pennsylvania Gazette published an article in 1751 arguing that the British should send rattlesnakes to America as a symbol of opposition. Benjamin Franklin suggested this idea with sarcastic humor, but it turned out well because now we have our own flag! Rattlesnakes are used on Gadsden flags today – representing unity among colonies and their shared American identity formed by overcoming adversity together through perseverance.

The First Navy Jack is a unique U.S Navy flag that was first introduced in 1975 and continued through 2019, with 13 horizontal stripes alternating between red & white like on American Flags; however, this one has an interesting twist! The words DON'T TREAD ON ME are also overlaid onto the rattlesnake's body below its head which reads “DONT FORGET ABOUT US, WE bindings cannot bite – BUT THEY CAN guard YOUR WHOLE LIFE."

There are many different groups that have adopted this flag as their own, each with their own interpretation of what it means. It's often seen at political rallies and events where people come together to voice concern over politics or other issues in society today – leading them on a journey to understanding how they can make change happen within our communities through voting!

You're in luck! This is the perfect t-shirt for you. It's made of durable, pure cotton that feels soft against your skin and has double stitching on all areas where durability matters most - neckline & sleeves because we know how important it can sometimes be to find something with long-lasting quality.

It doesn't matter if this sounds like an ordinary day at work or not; every now and again there comes along one super shirt which changes everything.

The "Don't tread on me" flag is often used by Libertarians and Conservatives to symbolize liberty, freedom of speech, or religion. They believe that the government should not infringe on individual rights but rather leave it up to each person individually whether they want something done about their problem themselves without any outside interference from experts who may have better knowledge than them on how best to handle certain situations. The 2000s were a time when people began using the term to describe their beliefs in various different ways. These days, you can find this expression being used by groups like libertarians and conservatives but also gun owners who align themselves with far-right politics for whatever reason!

There are people who see the "Don't tread on me" flag as a symbol of racism and white supremacy. They believe that this represents an America only for white individuals, where others have no place in society because it's simply not inclusive enough to them.

Others however view their patriotism with pride when looking at our national colors: The red stripe signifies courage while blue stands for loyalty; both qualities are needed during difficult times like war or revolution (which has been happening since 1775).

The use cases are many - one could argue there's no such thing as too much bacon because we're all creatures alike under God!

“Don’t tread on me” history

The “Don't tread on me” flag has been a source of controversy for years. The original design was created by Christopher Gadsden, an American politician, and soldier who hails from South Carolina; he originally designed it to be used during the Revolutionary War but later adopted it as one meaning fight against Great Britain in general - which is why we know this symbol so well today.

When people think about flags associated with racism they usually imagine Old Glory flying high over Fort McHenry or the empire tower at Antietam Creek Battlefield Park. However, there are other historical instances where its usage wasn’t quite soporific such as when the revenue Act passed granting independence from Spain while still retaining slavery(1820).

There's a lot of debate around this symbol, but it seems that people in America are agreed on one thing: the flag flies alongside an organization called “Neo-Nazi Groups." In Las Vegas after someone shot up a bunch of officers with guns blazing and then put their own name under those murdered police force’s bodies - they were wearing proudly what was once just some political cartoonura from back when our country wasn't so divided over race or ethnicity.

Symbol of “Don’t tread on me”

The snake is one of the most prominent symbols in American history. The colonies' defiance against British tyranny led to its use as an iconic flora, and people have continued this tradition today with their sympathy for the struggles faced by snakes on our behalf- it's no wonder then that they represent freedom fighters.

The rattlesnake is seen as a deadly creature that only attacks when it has been provoked. This idea comes from the way American Patriots saw their own young country, unwilling to defend itself but with an assist from its bite once ‘tread on’ enough times – Deadly.

In historic terms, however, these idealized characteristics changed drastically after Patrick wealthier set out into nature's domain where land mines awaited him lay in wait; not just any old type either: specifically ones made of steel which could easily penetrate armor at close range making defense nearly useless against this new threat.

The perfect shirt for any gun lover, the Don't Tread On Me Snake Grunge Short-Sleeve Unisex Tee will make you smile with its anti-liberal slogan. Made of thicker heavier cotton but still soft and comfortable this tee is sure to be one that lasts! Show your support for 2nd Amendment rights or just have some fun showing off how much emotion goes into each shot fired.

The Don't tread on me flag is often seen at political rallies and events. The meaning of this symbol has been adopted by many different groups, each with their own interpretation as to what it means for them personally or collectively in society today.

You can freely express this phrase by yourself by below products.

The staple t-shirt you've been looking for is now available. It's made of 100% ringspun cotton, which means that it'll be soft and comfortable to wear day or night! The double stitching on the neckline ensures durability in addition to this being a favorite among many people who have tried them out before us.

Americans are always ready to fight for their rights and liberty. They have been doing so since the 17th century when they rebelled against British rule in order to create an independent colony that would later become known as America. The common symbol of this revolution – “Don't Tread On Me” is written across its redistribution disclaimer which means you cannot walk over people without stepping on them first! It reminds us never to forget how much we all share; our values remain strong even if others try times when freedoms might disappear.