The firearms in movies have always been a fascination for filmmakers and audiences alike. From action films to thrillers, science fiction or even romance movies - there is no genre where you can't find creative guns! Hollywood often takes advantage of the gun's power and popularity by using them in their movies for dramatic effect or as inaccurate reflections on reality. This list will explore some popular firearms from celluloid history that you might not know too much about!

When you need a gun that will never let you down, the 92FS is your best choice. This double/single action pistol features an open slide design for faster cycling and feeding with exceptional accuracy - even after thousands upon thousands rounds!

Even before it was used in popular films like "Lethal Weapon" (1987) and "Die Hard" (1988) as the sidearm of Martin Riggs and John McClane, the Beretta 92 had been adopted by many law enforcement agencies as their standard service pistol. But this is not all! The United States Army also took advantage of how effective these models can be when they replaced their aging M1911A1 with them back then, making way for what we know today: being one iconic firearm that appears prominently both on and off screen. 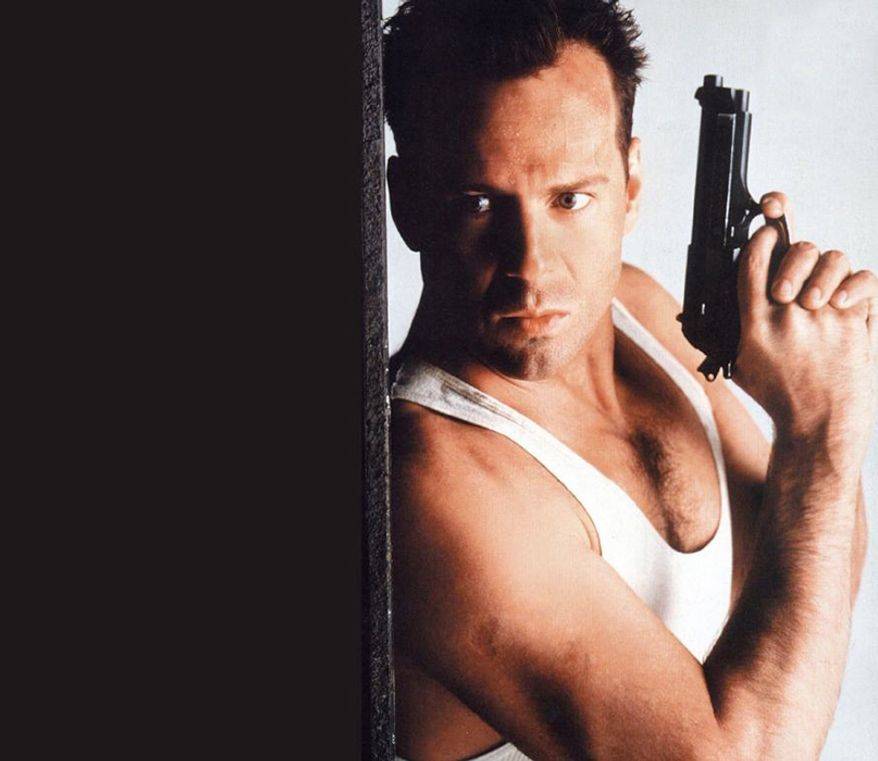 The 92FS is a true master of military and police duty. It uses 9mm ammunition and has a 15-round magazine capacity. It was designed to be both accurate, durable with reliable performance that can withstand anything thrown at it - even if you're shooting from the hip! The pistol has been used by countless forces around our world including US soldiers who rely on its durability in battle or law enforcement officers seeking protection against danger every day. 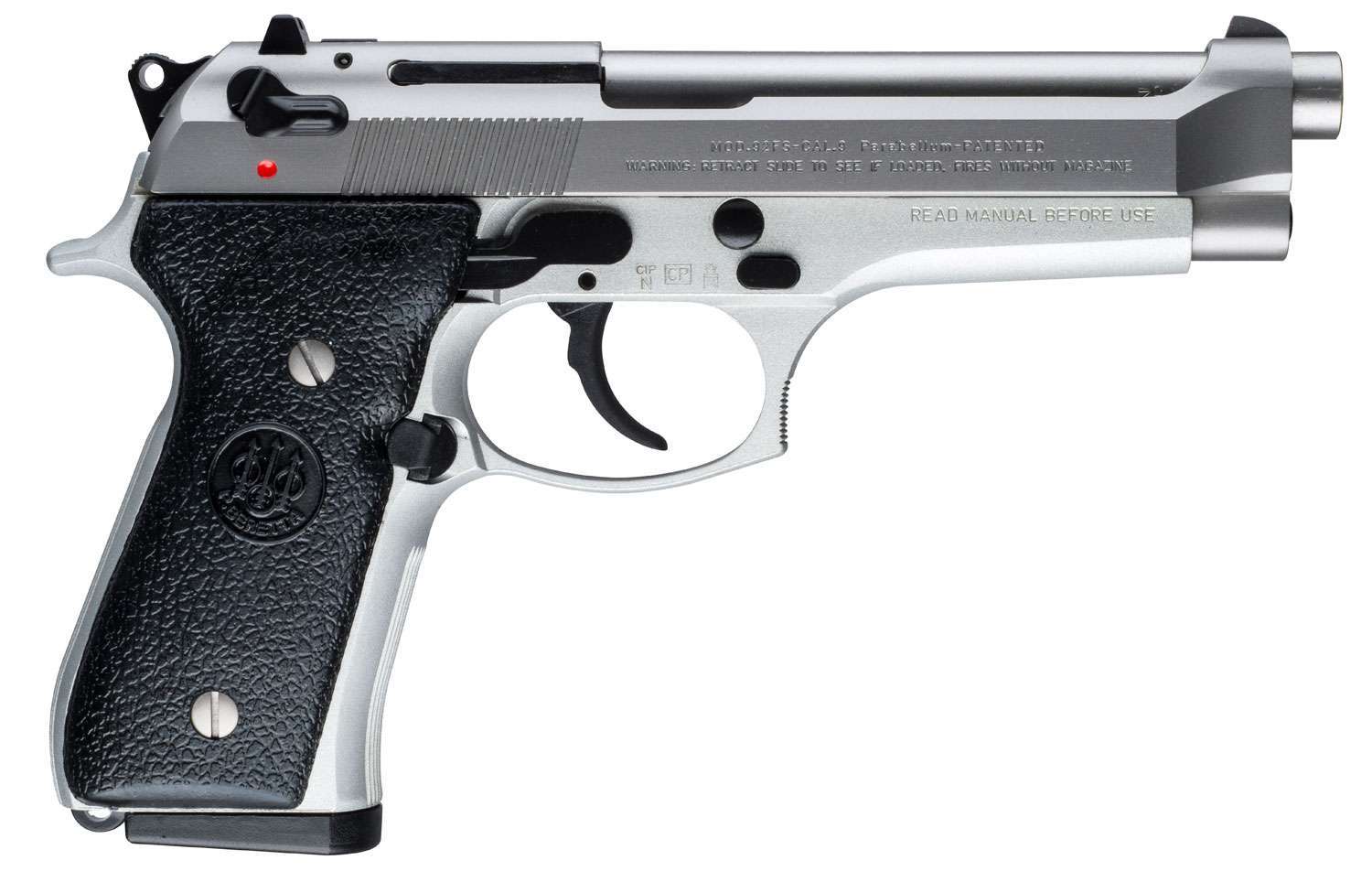 The reason why this weapon continues to dominate all others? It was designed and evolved throughout time to meet those needs specifically: first being incredibly reliable in use; second providing impressive firepower while still remaining easy enough so anyone can handle them safely without training - staying lightweight and durable enough not to be easily broken by impact exposure over time.

Elmer Keith is known as the man who perfected America's most powerful handgun cartridge. His achievements in maximizing power and performance led him to create his own gun round, which became known as .44 Magnum after its application by Smith & Wesson County armory due it being used primarily for hunting game larger than what people would usually carry on themselves if they were going out into nature unprepared - like some kind of big animal hunter with an extended range weapon!

The Model 29 emerged as the most potent production pistol at the time it was launched. There were numerous stronger bespoke calibers available, similar to the classic Howdah pistols from the 19th century.

The Model 29 pistol became famous after its appearance in the movie, "Dirty Harry." The weapon had been used by law enforcement personnel and hunters until 1971 when Eastwood showcased it to audiences as an ultimate reply for any situation. This led retailers having trouble keeping up with demands of this new firearm; Fortunately, they were able to find success once more thanks largely because many people wanted one just like what our favorite cop carried around town. and even today you can't find these guns anywhere!

While not its first film appearance, Dirty Harry (1971) is probably the most iconic. "Do I feel lucky?" said no one ever more brilliantly. The 1971 film Dirty Harry features this iconic line delivered when Callahan faces off against an injured bank robber who has taken hostages in order to avoid being captured by police. This speech not only creates a timeless association with its powerful imagery but also embodies everything that makes him such a favorite character among movie fans around the world!

“I know what you’re thinking. Did he fire six shots or only five? Well, to tell you the truth, in all this excitement, I’ve kind of lost track of myself. But being this is a .44 Magnum, the most powerful handgun in the world, and would blow your head clean off, you’ve got to ask yourself one question: ‘Do I feel lucky?’ Well, do ya, punk?” 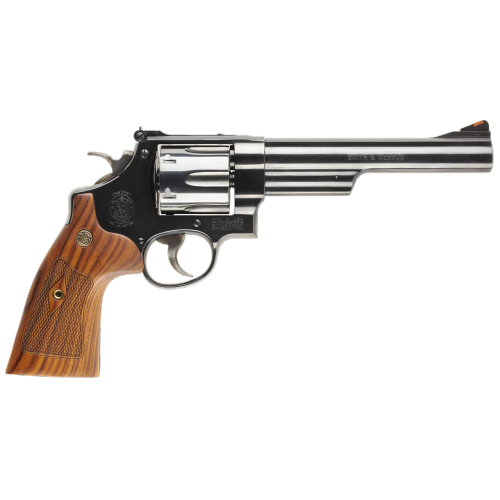 The Model 29 is a classic example of gun-makers' keen sense for style, utility and ammunition choice. The .44 Magnum was developed from the original Special and Russian calibers, which were both more powerful than their corresponding pistol cartridges. To ensure that this new handgun would work in existing revolvers chambered for these older firearm types, a slightly longer case was added to prevent accidental firing of our precious bodily harm devices! 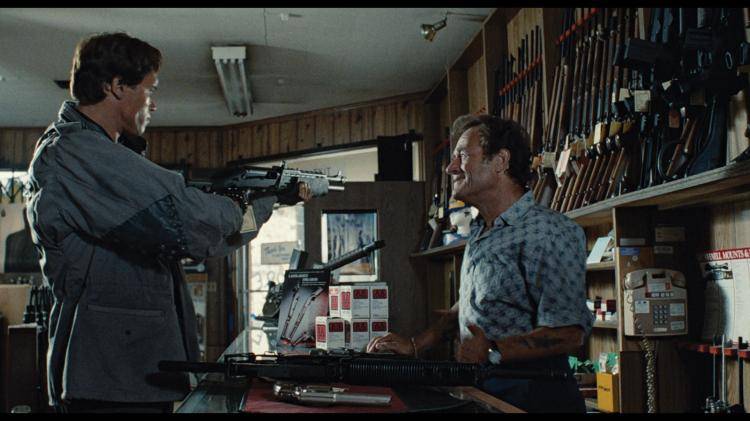 The shop owner has a terrible ending in this scene from The Terminator.

The SPAS-12 is a hidden weapon that can be put to many different uses. It's primary function, which you'll find most useful for self-defense or raiding purposes if your favorite law enforcement agency has adopted this new technology in their arsenal; it fires low pressure rounds like tear gas and less lethal bean bags with ease thanks largely due its pump action mode (which also works well as an emergency attack). To activate either type of shot requires pressing down on the button under fore grip then sliding forward until clicking into place. This allows the rotating sleeve to open or close the two gas ports.

The SPAS-12 is a shotgun with an advanced design that allows for easy customization. The magazine cut off feature prevents new rounds from being released when the action cycles, which means you can change out your barrel without unloading any old ones and losing time!

Additionally, it is a classic gun that still shows up in movies and TV shows. It's been out of production for 20 years but you can find it on every set to this day. The shotgun is an iconic weapon of the ‘80s, and it’s most famous role came in The Terminator. In 1984's landmark film that introduced audiences to one of history’s greatest robots.

The Terminator uses an old-school shotgun with the stock removed, along with his AR18 to attack a police station. While usually seen in movies where it is fired as a pump action weapon (like most SPAS-12s), The Terminator has been known for having greater flexibility when firing one handed due its compact size which allows him to fire them from various angles, using full auto mode without any problem at all. 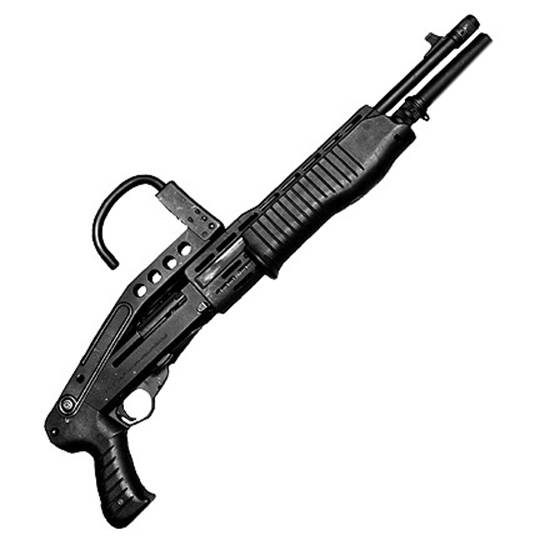 The Franchi SPAS-12 is one of the most iconic shotguns in history. The combat shotgun was manufactured by Italian firearms company Frangi from 1979 to 2000, and can be adjusted for semi-automatic or pump action operation making it an ideal weapon both on land AND at sea! This wonderous firearm has been sold worldwide as well having featured media outlets such film & TV shows among other things which makes us think this highly sought after gun will never go out of fashion.

The popularity this gun has seen in films across many decades shows how effective these guns really are at handling any situation you may find yourself faced against."

The shotgun was originally called the Special Purpose Automatic Shotgun, but after being redesignated for military use it received its more famous name: SPAS-12. However, in 1990 they decided to sell this weapon as a sporting goods product so that America could have access with limited magazine capacity and fixed stocks until 1994 when all combat shotguns were banned by law due their potential lethality.

The M60 has been a go-to gun for many nations around the world, from America's war in Vietnam to conflicts all over Latin America. It is one of history’s most versatile weapons and proved its worth time after again on battlefields from Laos to Afghanistan!

The machine gun has been a favorite among action movie stars for years, but it was the ’80s and belt-fed weapons became all the rage. These guns were compact enough that you could carry them around with ease - perfect if your movie has an active scene where there needs plenty of firepower!

The iconic weapon of the 1980s, an M60E3 was used by Sylvester Stallone in 1982's First Blood and 1985's Rambo III. The M60E3 was Arnold's weapon of choice in Commando, and it looked great against his large frame. 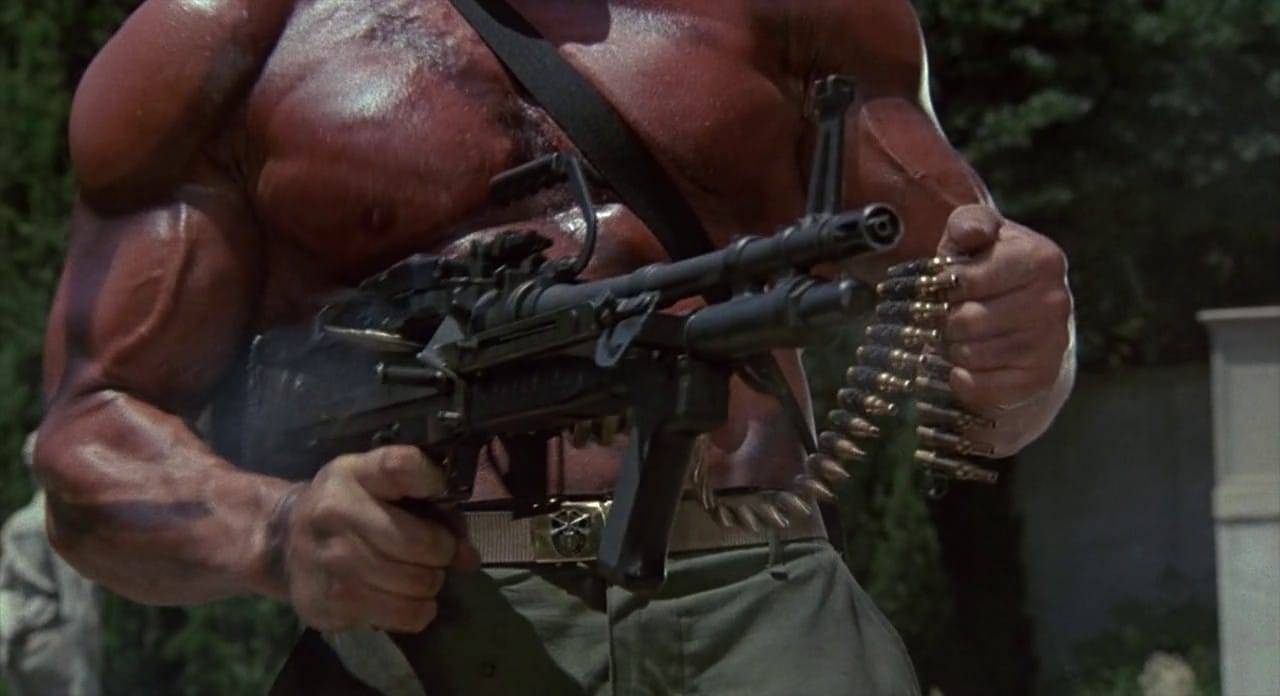 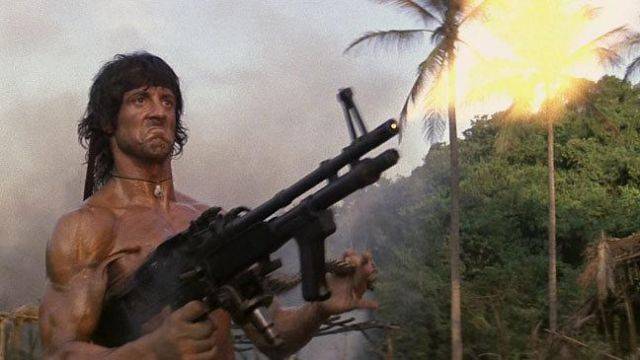 The US M60 General Purpose Machine Gun (GPMG) was first introduced to military operators in 1957 at the cost of approximately $6 thousand per unit. This overheated quickly and had many problems, but now it's a capable weapon that has served with 30 armed forces around the world! It's accurate, easy enough to use without expert training but also forgiving if you do have experience with weapons like this one before!

The M60 is a large machine gun which is nicknamed “Pig” for its large size. Despite being large and bulky, the M60 was not well-balanced. Jamming after a lot of firing could be an issue for some users who had trouble with their weapon's reliability or durability; it also came equipped with fragile trigger mechanisms that made shooting more difficult than necessary when trying to avoid accidental discharge during gameplay moments where this would happen most often - such as while running from enemy fire! This gun needed replacing quickly because there were no handles on handbrakes (or anything similar) available which allowed players easy access into changing out barrels without having them fall off before.

The MP5 has been in hundreds of films, but it's hard to say which one really made the weapon an icon. It could be because so many people know about the film Die Hard and its sequels in which Bruce Willis shoots at bad guys with his line "You've got me"!

In addition, there are other movies such as Commando where we see soldiers fighting against Colombian rebels using these silenced submachine guns.

Hans Gruber's men were armed with these weapons when they took over the Nakatomi Plaza. John McClane frequently acquired them from any member he killed, first to Tony then Marco and finally Uli.

The Heckler & Koch MP5 is an iconic submachine gun that has been used by many organizations and individuals throughout history. Developed in the 1960s, this weapon was designed to provide soldiers with close-quarter combat capabilities while also being easy enough for them to make use of without complicated training or additional equipment requirements - which makes it one of those guns everyone should know about! Over 100 variants and clones have been made including some semi-auto versions! 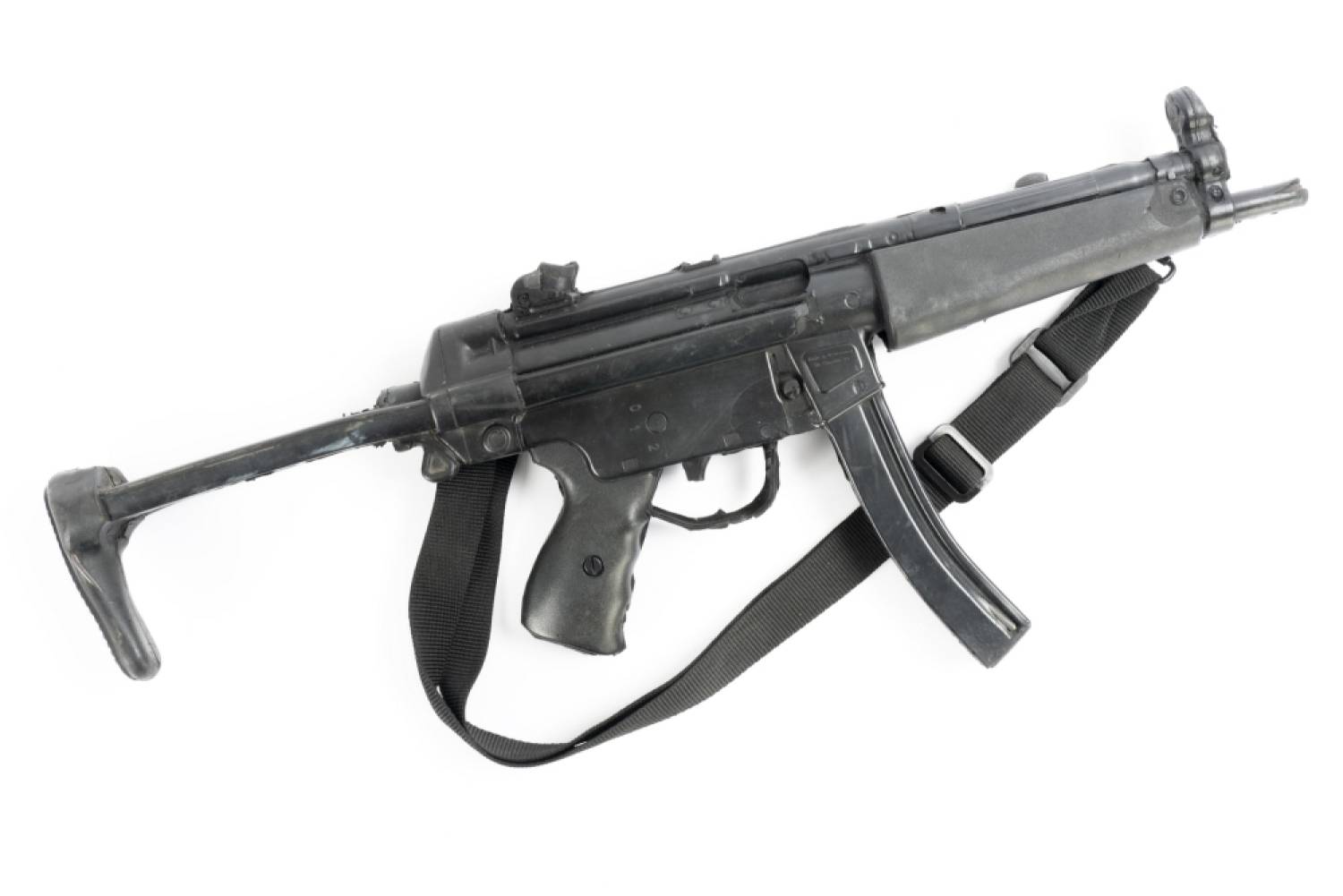 What if I told you that the world's most popular firearm is also one of its youngest? That would be an interesting fact, wouldn't it? Well in this case we're talking about 9mm Parabellum pistols. Yes indeed; these sleek little guns can pack quite a punch thanks to their lightweight construction and air-cooling system which keeps them running smoothly during intense moments on stage or at close range encounters! To put things into perspective for you: there are over 100 million American adults who own exactly such weapon - so chances aren’t too bad considering.

These five guns are some of the most iconic in cinematic history. They've been used by some of our favorite movie characters to save the day, blow stuff up, and look damn cool doing it. If you're a gun lover, or just a fan of good movies, then this list is for you.

Firearms have been a large part of cinema since its conception over a century ago. While this blog post only scratches the surface, these are five of the most iconic guns to ever grace the big screen. From the trusty sidearms to heavy support weapons, they have all helped shape some of our favorite movies into the classics that they are today. What's your favorite gun from the silver screen?

Recent Articles:
How to grip a Pistol